The Old Adult Education Centre before it was burnt down.  This was the original Burnie District Gemstone's Club then known as The Burnie Lapidary Club Rooms situated in the old basement (The Old Pottery Room) cleaned out by a working bee to clean up the room.   Dirt floors and low ceilings was the highlight of the new clubs accommodation.
Prior to this the building was the original Parklands High School. 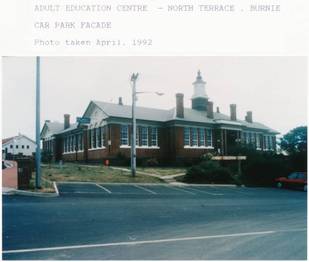 The club was originally formed by 34 people with the intention of becoming members of the Burnie Lapidary Club in July, 1967.
Margaret Johnson and Bob Wilson are the oldest members of our club and were part of the original club and they are still members today in 2012.   There was a joining fee of $5 per member and the annual subscription was $3 per single full member and $4 for husband and wife.  Junior membersip was discussed at the rate of $3 to join and $1 per year for those between 16 and 18 years of age but it was decided to leave this matter in abeyance.

The first officials of the club were as follows:

A couple of old photos from the original club rooms